Read our case study on how Marvel Stadium and MKTG used Komo to create an interactive hub for fans to play and be rewarded in-stadium.

Marvel Stadium is a large multi-purpose entertainment venue located in Victoria, Australia. The stadium caters to events in industries ranging from entertainment and sports, to corporate or casual events. The stadium has been used by organisations such as the Australian Football League and the National Rugby League to hold major sporting events, and as concert venues by prominent artists such as Taylor Swift and Ed Sheeran.

MKTG Australia was tasked to improve fan engagement at Marvel stadium by delivering a unique, interactive, and digitally integrated game day experience for the fans. It was key that the solution MKTG chose was a fantastic fan experience, easy to use, and not only connected with the digital screens or the stadium but also with the food and beverage retailers in stadium.

MKTG also had the objective of building on the Marvel Stadium first-party database, further enriching it and their existing database with non-intrusive market research.

Komo's Engagement Hub was used to create the Marvel Stadium FanHub which lived as its own URL (marvelstadiumfanhub.com.au) housed the following exclusive and interactive content about the game that fans were watching live and the Marvel franchise:

Multi Predictor Game: Fans guessed the outcome of a series of in-game events such as “Who will with the game?” ‘Who will kick the most goals this game?’ A winner was drawn from a pool of participants who answered all five questions correctly to win a $100 Mastercard Gift Card.

Number Guess: A slider game where fans guessed the combined scores of both teams for a game. This game is open to participants an hour before the first bounce to halftime, with the winning entry receiving a $100 Mastercard Gift Card.

Live Trivia: 'The Big Footy Quiz' Live Trivia game where the Komo tech connected with the Big Screen at half time which featured a countdown clock. Fans in stadium were prompted to all play against each other at the same time to find the stadiums biggest fan. The LIVE quiz consisted of 12 short quiz questions that fans answered during halftime. The fan with the highest score was the winner and received a $100 Mastercard Gift Card, with the top 100 entrants winning a Komo Digital Coupon for free chips which they could redeem on the day at any kiosk in stadium.

Digital Coupons: The Komo Digital Coupon technology was used to reward and incentivise the fans to engage with the Fan Hub. The coupons were connected with the Marvel Stadium Point of Sale systems through unique QR codes and the food and beverage prizes were awarded and redeemed by the fans instantly. 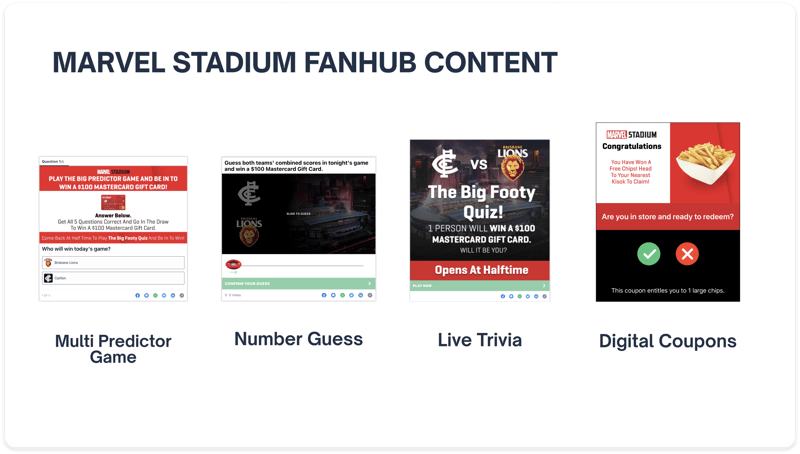 Marvel Quiz: The Marvel Quiz was a fun activity to supplement exclusive content on the FanHub and is active throughout the entirety of the game, and served to generate audience engagement and brand awareness of the Marvel Franchise among the audience.

Checklist: The checklist allowed users to check off options that apply to them, where their responses determine how ‘footy mad’ they are. This card was active throughout the whole game.

Fact Card: Two fact cards displaying trivia about the football teams were shown for each game. The fact cards acted as additional content for the fans to engage with in the game downtime. 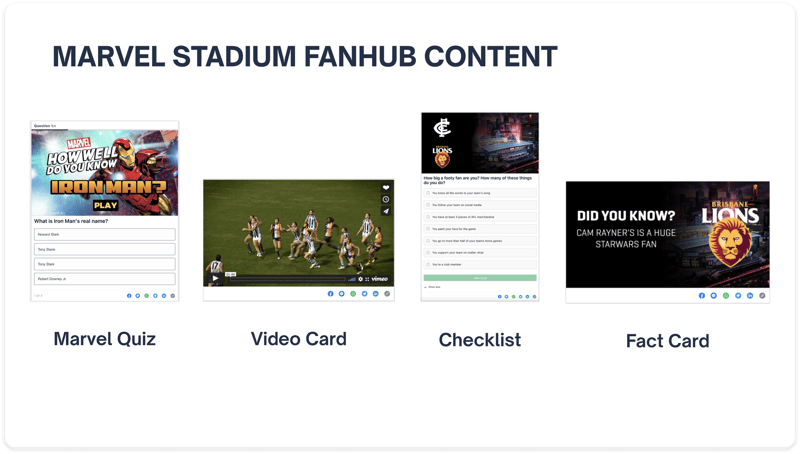 “We recently worked with Komo to trial their new in stadium fan engagement technology at Marvel Stadium with a crowd of over 35,000 footy fans. Their tech platform integrated with our systems seamlessly and took less than a minute to get set up."

"We are impressed by the capabilities of the technology which is not only highly engaging for the fans, but also has some fantastic commercial benefits for sponsors. Komo's team worked with efficiency and professionalism and we’re looking forward to working with them again in the future.”

The campaign was highly successful in achieving the outlined objectives. The Marvel FanHub generated 9,410 total unique hub entries on a total of 13,975 unique impressions, indicating that 67% of all fans that landed on the Fan Hub entered a competition and parted with their first party data.

The average engagement time per user was 3 minutes and 29 seconds, providing all brands involved with valuable brand exposure to drive awareness and brand recall. 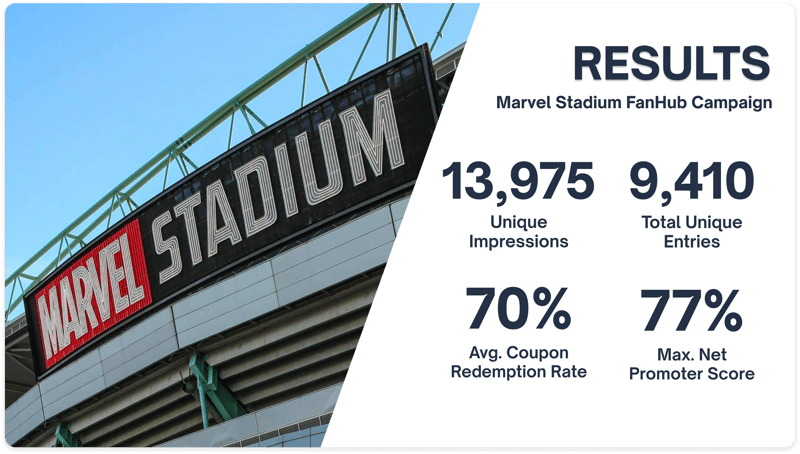 The hub reported a maximum net promoter score of 77%, proving that the Marvel FanHub was well-received by the audience and successful in delivering an elevated game day experience.

The Digital Coupon campaign was also a successful in engaging audiences with rewards, accounting for a 70% coupon redemption rate. 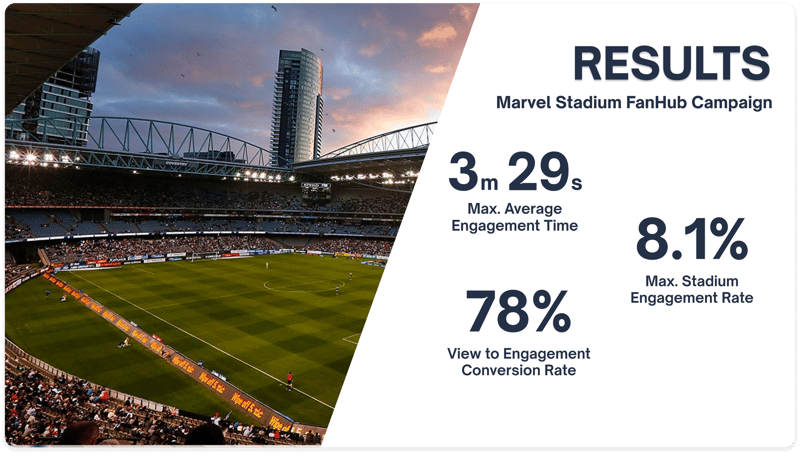 Discover how you can innovatively engage your community with Komo’s Engagement Hub and reward audiences with Digital Coupons.

How an AFL Team Generated Leads for Sponsors In-stadium