Digitally Engaging 30% of the Live Audience with Murdoch University

Discover how Murdoch University engaged 30% of its live audience with Komo Digital's Live Trivia. Read about our case study today and be inspired!

Komo’s Live Trivia feature was able to help Murdoch University accomplish its audience engagement goals by creating digital activations that allowed concert-goers to stand a chance to win a grand prize of receiving a VIP experience for themselves and 3 friends with Shawn Mendes, the concert’s headliner.

Runner-up prizes included an instant VIP upgrade for themselves and 3 friends, with every participant who registered for the digital activations winning their choice of merchandise.

A total of 3 digital activations were held during intermissions in between scheduled sets, with 3 grand and runner-up prize winners selected from each round. Komo’s Digital Coupons were used to track the number of merchandise coupons received and streamline the redemption process. 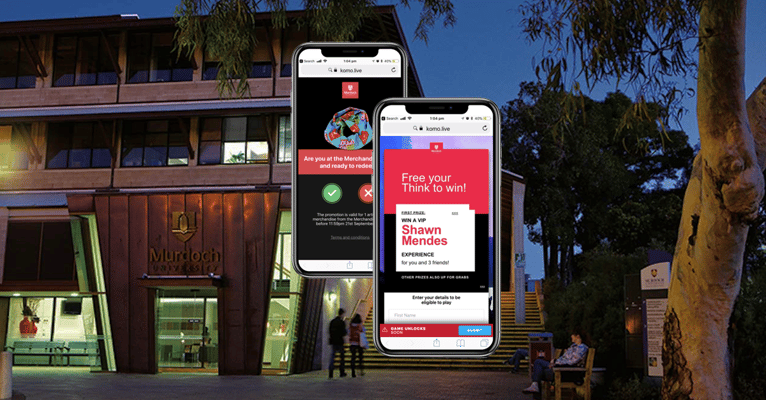 With 4,832 concert attendees, the campaign reported 1,493 total registrations across the 3 digital activations, producing engagement rates between 7.8% to 30.89%.

As a result of the digital activations, a total of 1,027 leads were generated in the form of unique total registrations. Murdoch University was displayed on the stadium’s big screen for 9 minutes in total, resulting in immense brand exposure to their target audience. The average active engagement per player was 1 minute and 43 seconds, and the total active in-game engagement was 42 hours 36 minutes and 5 seconds.

From a pool of 1,027 total unique registrations, 751 participants opted in for the Sound On festival mailing list (73.1% opt-in rate).

Discover how you can innovatively engage your audience with Komo’s Live Trivia.

Learn How Basketball Forever TRIPLED Their Email Database In 5-weeks

Using Gamification to Promote Led Zeppelin on their 50th Anniversary

Warner Music Australia used gamification to promote Led Zeppelin for their 50th anniversary. Find out how they did it using Komo's Live Trivia in our...

Discover how West Coast Fever generated a 91% brand recall rate for their sponsor with Komo Digital's Live Trivia. Read our case study to be inspired!